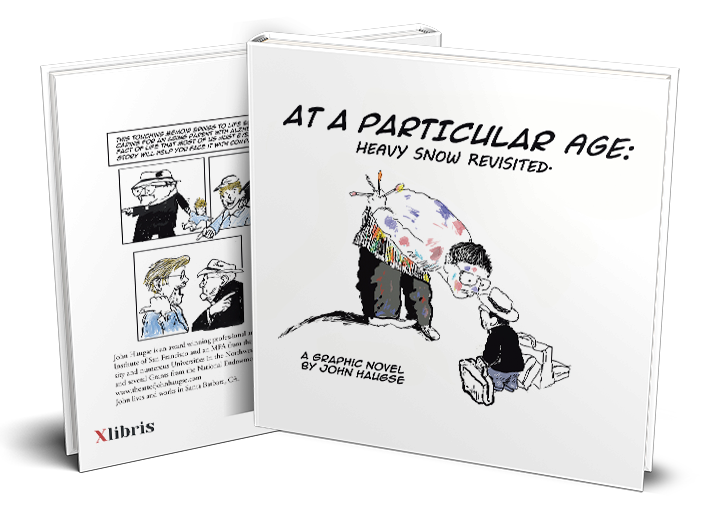 At a Particular Age: Heavy Snow Revisited is the story of a son taking care of his father who is slowly and painfully disappearing into Alzheimer’s disease. Through the illustrated-vignette style of the book, John Haugse was able to portray with poignancy and humor the tragedy of Alzheimer’s and the terrible strain it puts on the caregiver, family and friends. The son’s disturbing dream sequences reveal the psyche and the hidden fears we all have about this frightening disease.

While the story focuses on the care of an Alzheimer’s suffer, it is also the story of how an estranged father and son are brought together by illness. For over forty years the conservative minister father and the artist son have had a relationship based on conflict and anger, By caring for his father, the son hopes to resolve their bitter difficulties and find peace before the disease makes it impossible.

THE AUTHOR ORDER A COPY NOW

A Review by Linda Chase, a Published Author

John Haugse’ graphic novel At a Particular Age transcends the genre’s usual fantasy and super hero themes to tackle the difficult subject of Alzheimer’s. With humor and unflinching honesty, Haugse brings a vivid immediacy to his story of caring for his father, who suffered from the disease. The original version was published in 1999 as Heavy Snow; now, more than 20 years older, Haugse re-examines his relationship with his father and this affliction that strikes at the very essence of the self: the mind.

A professional illustrator and animator, Haugse draws on his artistic sensibility to engage the reader in this complex, often thorny father-son journey. The dialogue crackles with sardonic wit.

John’s father, a Lutheran minister, is portrayed as an irascible, stubborn, sometimes funny individual who frequently clashes with his adolescent son John over everything. As John pursues his passion for art, the relationship between father and son deteriorates: “Over the years we set our jaws and lost sight of each other,” Haugse writes.

All that changes dramatically when John’s father begins showing signs of dementia: forgetting where he parked the car, getting lost while driving familiar streets. Yet when John suggests to his father that maybe he should see a shrink, the retort is rapier-sharp: “Have you thought about seeing a barber about your moustache?”

Even at its bleakest, the story has moments of hilarity, as when a woman at his father’s nursing home is convinced that she is married to John’s dad, Haugse is especially effective in probing his nightmarish inner turmoil and giving voice to unbidden thoughts, dark and fraught with guilt.

In one of the most poignant scenes in the book, John is walking with his father outside the nursing home on a winter’s day, the father’s tracks vanishing under the falling snow. , “I’m not surprised”, his father said, ” I often feel like I’m disappearing.”

In a heart-wrenching coda, John reveals that his sister Ruth was diagnosed with early-onset Alzheimer’s and died six years later. At the end of this tender, moving portrait of a father-son journey, without mawkishness or sentimentality, Haugse sounds a note of hope that through the crucible of illness, even one as devastating as Alzheimer’s, there is the possibility of redemption and reconciliation.

A Review by Dr. Paul Gertner

AT A PARTICULAR AGE: Heavy Snow revisited is an excellent, detailed non-sentimental yet compassionate description of the early, middle and late stages of Alzheimer’s disease.

Written with a gentle touch of humor, which is hard to find in a difficult and tragic situation as this . The author has great powers of observation, perhaps promoted by the fact that there is pictorial accompaniment to the text.

This book would be of special interest to people who deal with patients with Alzheimer’s disease such as caregivers of a loved one.